Malvern Springs tourist park, with 25 log lodge units and including the Malvern Springs golf course and clubhouse, has been purchased by Mr. and Mrs. Chester A. Cogburn, operators of Pisgah ranch near Candler, from L. B. Jackson. 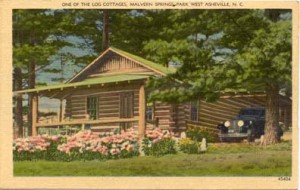 The Malvern Springs tourist park was erected by Mr. Jackson and R. H Edney in 1937 at a cost in excess of $50,000. The park is widely known as one of the finest of its kind in the South and the only tourist park in the South with a golf course and golf clubhouse. The purchase price was not announced. Mr. Cogburn said he plans to erect a barn for riding horses, enlarge the scope of the dining room and do considerable renovation work on the various units of the park.

Several of the horses of the Pisgah ranch barns have been moved to Malvern Springs and others will be added in the spring, it was learned. There are a number of fine horseback trails in and around Malvern Hills and the golf course. Mr. Cogburn said he and Mrs. Cogburn plan to develop the park on a year-round basis. Devoted to a great extent to families connected with the army here, Malvern Springs park will go “all out” for tourist trade as soon as the war is over, Mr. Cogburn said. He stressed the point that the park will be given full time by he and Mrs. Cogburn in making the place a year-round resort center.

Located on the western edge of the city, the park has been a popular tourist center for several years.

We are not starting fundraising until we have a purchase contract for the property, but we are accepting donations to help us move forward with the work. Click here to donate through RiverLink

Currently, there are no scheduled public events. We are planning to have a fund-raising kick-off in mid-May, but have not worked out details.

If you would like a tour of the property or to help us create the park, email caniecreekgreenway@gmail.com